This is the first blog in a series about check-in services for television and entertainment content. This week I will provide an overview of five different applications that are competing in this field. Today: GetGlue.

GetGlue is a social network for entertainment on which users ‘can check-in and rate things to discover new favorites, see what your friends are into, get stickers and win free stuff’. The service started in 2009 and is being developed in New York by AdaptiveBlue. According to GetGlue CEO and founder Alex Iskold the service has over 1.5 million users (Twitter has over a 100 million active users).

The application allows users to check-in (like, rate, think, watch, and follow) the entertainment, people, countries, books and videogames they are enjoying. Based on this, the service provides recommendations of entertainment such as series, music, books and movies the user might enjoy. Furthermore, user can earn badges and stickers based on the shows they are checking into and win prices and discounts for limited time check-ins. When users earn enough stickers they are send (hard copy) to the user (by traditional mail). When checked-in the user becomes part of the real-time conversation around that show by following a conversation stream. During the premiere of Season 4 of True Blood on HBO the service reached a new check-in record with  over 38.000 check-ins.

GetGlue is definitely a main player on the entertainment check-in market. The service has received over 12 million dollar in capital funding and the number of check-ins are still growing. The company has partnered with many media partners like Warner Bros, ESPN, HBO, PBS, ABC, SyFy, FOX, TNT, CNN, MSNBC, Discovery, TBS, DreamWorks Pictures, Disney, Sony Pictures, and Universal and many others. The service is available on the main platforms (iOS, Android, Blackberry) and is accessible through a mobile website. And with media deals with both entertainment companies and advertisers the service is developing a viable business model (e.g. win tickets by checking-in).

Especially with the increased attention and popularity for second screen applications that can be used while watching TV, the future seems bright for GetGlue. If the company is able to build on its business model with advertisement deals and specials with media partners it can be ahead of many service providers and set-top box developers who are trying to gain a presence on the second screen. A next step would be the ability to sync the application with (live) television and automated check-ins like one of its competitors, IntoNow from Yahoo, does.

Be sure to check again tomorrow for a new post about IntoNow. 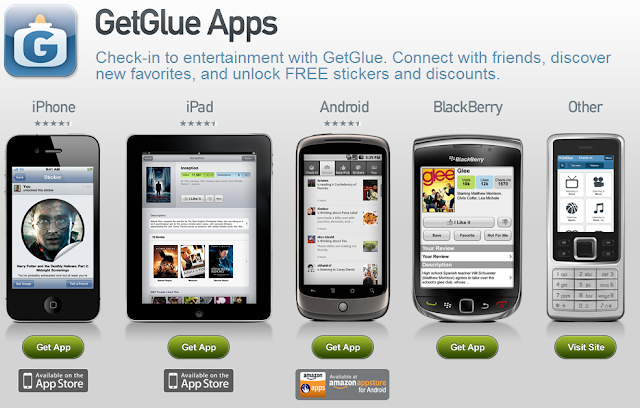