Below a summary of Mr. Thexton’s perspective during ‘The Great Connected Television Debate: Will The Internet Be The End Of Television As We Know It’ during IBC 2012. 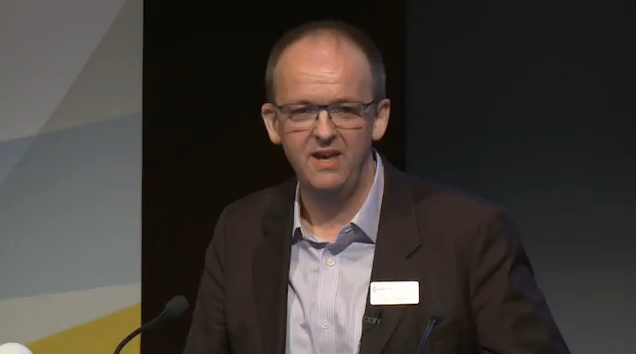 Mr. Thexton start with pointing at the technological developments within the field of (IP)video and video delivery. At average and peak times broadband in the UK serves 50% video traffic. The commoditization of broadband will result in lower costs and cheaper connected devices and delivery to these devices. As a result more screens and devices will be available and it’s the channel that has to adapt to this development. Simply putting an ethernet connection on the back of a TV won’t result in a ‘Connected TV’  experience. Therefore, in minutes viewed measurement lies a trap, it’s about how engaged the viewer is during those minutes.

Also, channels are becoming less relevant since content is discovered differently. It’s the program name that is being typed into the search box in within a STB, website or on-demand platform. The curation value is high for traditional channels and has always been one of the powers of popular channels. However, fragmentation has been developing since digital television and is taking a leap with new places for content discovery around the web and on connected devices. The unique aspect of the connected device however, is personalization. ‘I want content that resolves around me (…) and not what some channel thinks might be interesting for me in the future. A social aspect comes in as well with friends joining in the personalization process.

The advantage for channels are content rights. Channels buy content rights and have a powerful system for mass distribution of this content. It’s not a ‘pay as you go’ business, it’s a so called ‘pay upfront’ universe in which you pay first and than go after the audience. Thexton argues that what has to happen in this new connected universe, channels will go after their connected viewers in a even more aggressive way, and the smart ones will be able to make that personalized experience even more valuable.

Value of the channel and the living room

As an example Thexton discusses the future changes in the living room as we know it. They looked at the size certain types of content should be. For example, does 60-inches of sports provide the same value as 60-inches of news? He concludes stating there will be a growth of connected devices with more personalized content, channels have a lot of strengths and have to show in the coming years whether they can remain relevant.

The Great Connected Television Debate: Jon Honeycutt (Discovery) on The End Of Television As We Know It

A summary of Jon Honeycutt's perspective during 'The Great Connected Television Debate: Will The Internet Be The End Of Television...