Below a summary of Mr. Honeycutt’s perspective during ‘The Great Connected Television Debate: Will The Internet Be The End Of Television As We Know It’ during IBC 2012. 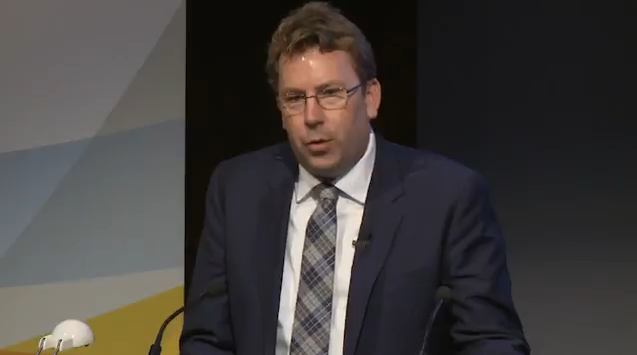 The seconds speaker was Jon Honeycutt, EVP and COO for Discovery Networks International. He argues that people have always been talking about the death of TV industry or the death of linear channels. And although the industry has been through changes when free terrestrial was joined by paid cable and the analog signal became digital. DVR’s, which where considered to be the death of linear TV, found its place within the landscape and cohabitating very nicely in the living room. So change to television is nothing new. With the growth of digital connected devices traditional channels adapt and improve their offering and will be able to translate the disruption into opportunity.

Mr. Honeycutt want to go beyond the hype of the trends and numbers and tries to place the developments as being part of the ever-ongoing process of technological innovation. People are watching more linear TV than ever, average users from the UK and Italy watch 4 hours of linear TV per day and only 2 hours of TV on the Internet per month. In The Netherlands and Sweden catch-up TV counts for 85% of all on-demand viewing. And as long as the implementation of the technology that is capable of delivering a high quality of experience (QoE) for users is limited in some upcoming countries (he mentions India and Brazil) traditional linear TV channels remain relevant.

In the end viewers want high quality content that is easy findable and makes you want to talk about it. Discovery sees itself as a key player within the value chain by creating high quality content which is vital for the market and the TV ecosystem. And secondly, viewers have a need for curation and want quality content that is relevant and interesting. Social and intelligent recommendation applications and tools will play an important role but won’t take over the curated TV channel. As Mr. Bergman noted, it depends on demographics and tools are being used differently during our lifetime. Social TV will be driving linear viewing since it’s provided a common shared experience. ‘TV to talk about’ will thrive because of Social TV and social media.

Broadcaster need to adapt but there are industry fundamentals

As Mr. Honeycutt sums up: “broadcasters need to adapt and continue to be relevant, and those that can’t or won’t may indeed become irrelevant. (…) Successful broadcasters will need to invest in content, extend their reach and engage viewers across multiple platforms in challenging and exciting ways.”

However, although Mr. Honeycutt acknowledges theses developments there are some key fundamentals of the TV industry that must hold true.

The Great Connected Television Debate: Saul Berman (IBM) on The End Of Television As We Know It

A summary of Saul Berman's perspective during 'The Great Connected Television Debate: Will The Internet Be The End Of Television...