A week after the IBC 2011 conference and as the dust settles in Amsterdam it is time to look back at the business session of TV Genius and GFK research on social measurement of audience engagement. The session was named ‘Viewers Like This: Measuring Engagement Through the Power of Social’ and included Tom Weiss who is the ceo of TV Genius and Nick North who is cmo at GfK Media Sector. Below an overview and my perspective on the session.

The session started by listing the trends for the broadcasting industry: social, mobile, and local. Social in the form of ‘connected audiences’, mobile because TV is moves to different devices, and local since user interaction is shifting and dispersing. More portable screens means more opportunities to watch (temporary) TV, although they are unlikely to replace the traditional TV set with a bigger screen, higher quality images, and better sound.

Connected TV is television plus additional content derived from connected networks. An important aspect is the influence of social media on viewer behavior and the rise of social TV. But how big is social TV and are social media threatening the numbers of hours spend watching television? Nick North gave some interesting numbers and insight reflecting on a recent study on the relationship between TV and social networks, technology and companion devices performed by GFK and Deloitte (available here). The unique aspect of television combined with social network is the feeling of liveness and community feeling of watching together. As expected, the greatest intensity of commenting on programmes is during transmission, not before or after, when activity can plummet rapidly. The key genres to share comments during the show are entertainment, sports, news, soaps, followed by reality. As an example, during the Eurovision Songfestival in Europe 25% of the viewers interacted with friends during the show.

But what are the motivations of viewers to share? The research shows that 30% of the respondents who engage in social interaction while watching television experience a more communal feeling, they are more excited about the show, and makes the viewing richer. Although some said it distracts from viewing, the results indicate an added value to the television experience. A result of this sharing behaviour is the encouragement to the rest of the social network to catch-up the broadcast they missed, either online or on their connected device. Because of this, a few minutes on a social network can drive hours of TV. Social interaction while watching television creates a ‘social sofa without spatial constraint’.

It’s important to note that these trends, although growing rapidly, are still marginal compared to the total time spend watching television. It applies to a niche market of younger age groups who use social networks to discover programmes. The majority and therefore the most powerful form of recommendation is the trailer.

As a result television is able to reach a bigger audience beyond the traditional living room. Social interaction creates higher viewer engagement and ‘brand’ advocacy and as a result an higher intention to buy. As Eric Schmidt noted at a recent James MacTaggart lecture (watch it on YouTube) during The Edinburgh International Television Festival;

‘We are riding a second wave of interactivity with the convergence of television and Internet screens..but most important it’s social, […] trending #hashtags raise awareness of shows, boost ratings, predicts what’s going to be hot next week. […] It can me a metric for viewer engagement, a vehicle for instant feedback, a channel for reaching people outside broadcasting times, and it can also provide a great incentive for watching live’.

The second part of this post will elaborate more on the contribution of Tom Weiss, ceo of TV Genius, during the session. He questions the representativeness social metrics and if the number of tweets can be used as a valid KPI? Does the volume of posts indicate the size of the audience or tell anything about the strength of engagement? 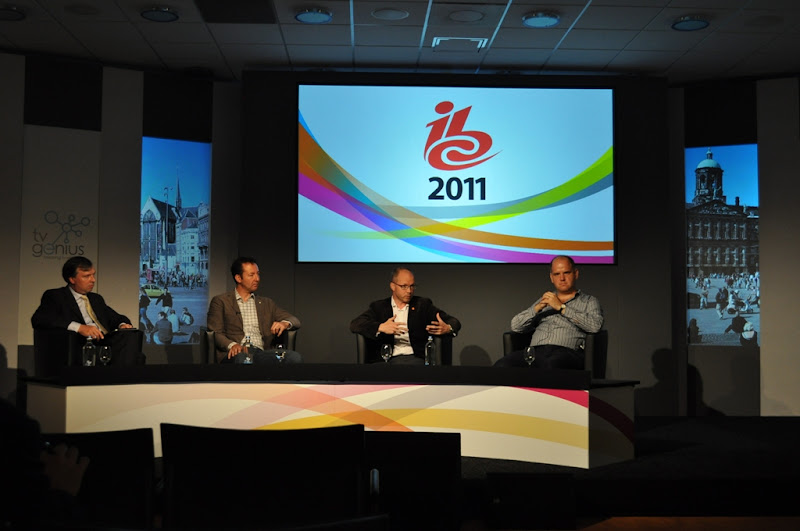 This is part one of my recap of the business session during IBC 2011 of TV Genius and GFK research on social measurement of audience engagement. Find part two here.