The NextGuide app was introduced as an iPad application that helps you to find (new) content by giving recommendations based on your interest, your social graph, and the content you watch. It allows you to set reminders for shows that will air on live TV and it shows all the locations of on-demand content on video on demand channels including Amazon Prime, Amazon Instant Video, iTunes, Hulu Plus, and Netflix.

Today Djiit, the company behind the NextGuide app, launched NextGuide.tv, a web version of the iOS app. The site helps people to discover and watch shows on live TV and popular streaming services, to search and explore TV shows and movies, and to see what their friends recommend and watch. NextGuide Web is launching as a closed beta for the public and all users will have invitations to share with friends. All existing Dijit Remote and NextGuide app users can use their account credentials (or Facebook Connect) to log in to NextGuide Web immediately, and Miso (which was acquired by Dijit) users will have access within the month. The site is available worldwide but NextGuide Web only supports TV and movie catalogs for North American users at present. Jeremy Toeman, CEO and founder of Dijit, discussed the reason to launch a web version of the popular app with Robert Scoble:

“One of the things that we learned from our friends in the TV industry is that apps are great, people love apps, but the one thing that you definitely will have in front of you at all times is a web browser. And there are a lot of people across this country and others that when they’re watching TV they got a laptop or even their desktop somewhere in their room, and they don’t always have something to pull out at the last minute and download something to learn something more about a TV show. So we’re launching good old web”

The future of the TV guide: one-click recommendations, search and social

NextGuide is doing a great job in providing a one-click solution for TV and video content. By providing universal search it allows users to look up any show and see when the next episode airs, where to watch previous episodes and create a watch list of shows people still want to watch. It informs the user when new episodes will be broadcasted or are added to a streaming service. The service will support notification through the app but also e-mail, Facebook, text message, and Twitter so a users can use the app just for that. After a notification is received a user can set their DVR to record the episode from within the NextGuide.tv app. At the moment it support DirecTV and Comcast set top boxes but NextGuide is working with other companies to integrate their service. This integration works both ways since cable companies and TV networks can integrate the NextGuide reminder functionality on their devices, apps and websites to let their users to set reminders. By (optionally) integrating with your social graph (just Facebook at the moment) the company supports one-click recommendation from friends by allowing you to see the shows they liked on Facebook (even from friends who are not using NextGuide) or shows they have added to their watch list.

There’s a lot of competition in the field of TV guides and recommendation engines. All popular streaming platforms provide similar services and also cable providers like Comcast and DirecTV have popular apps. However, NextGuide sees itself as a data machine that wants to recommend the right show on the right moment (and help you find it). This could mean that in the future you get different recommendations based on your location, day, time, season, recent (online) activities etc. By focussing on universal search, (social) recommendations and one-click functionalities it tries to differentiate from others in the market. As Colin Dixon, Chief Analyst with nScreenMedia, notes in the press release:

“Audiences have plenty of choice when it comes to search and discovery of TV shows and movies, what is much rarer is a simple, intuitive guide that brings together TV broadcasting with online streaming, as in the new NextGuide.”

How to make money

The business model for NextGuide includes advertising and data licensing. At the moment the company is selling and licensing some of its data but is not considering any monetization options within the application until next year. “You can’t make money in TV until you have a massive audience” says Jeremy Toeman. So by growing their user base and partnerships the company hopes to attract this ‘critical mass’. The application has over a million users at the moment, but it has to grow in tenfold before monetization becomes relevant.

Will NextGuide.tv be the new Miso 2.0?

On February 1st  Dijit bought the social check-in app Miso which is described as: “The Miso app was the first-ever “Social TV” service that lets users share what they are watching with their friends, post to social networks, and connect with fans around the shows they love. For “checking in”, users can collect points and unlock virtual badges”. After the acquisition the recently launched Quips application was discarded (however, it’s still available in the Appstore) and the CEO Somrat Niyogi left the company. The Miso press page hasn’t been updated since May 2012, the Miso Twitter account is inactive (last tweet was February first announcing the acquisition), and the former company blog (blog.gomiso.com) redirects to the weblog of co-founder Timothy Lee. The iOS application hasn’t been updated since November 2012 and the Android version was last updated in January 2011. Some of this tells me the application is no longer the key priority and the acquisition by Dijit was mostly about the technology and patents. It seems as if Dijit is not planning on updating Miso which could mean some of its technology will be integrated into NextGuide. For example, by allowing users to check-in to a TV show, user data can be improved and the application becomes more of a companion app. Also the Miso Sideshow app provides technology to increase social interaction and improve user data by creating interactive ‘sideshows’. Adding more social features makes the app much more similar to Zeebox. Jeremy Toeman noted it doesn’t want to force users to use the social aspect of NextGuide so it will be interesting to see if the focus remains on being a recommendation or if it will be become the next TV companion app.

I asked Jeremy Toeman on Google+ the question if there are any plans to integrate or update the recently acquired Miso app, to which he responded: “yup – it’ll happen fairly soon!” So stay tuned for more NextGuide updates!

Watch the interview between Robert Scoble and Jeremy Toeman:

Below you can find screenshots of NextGuide.tv: 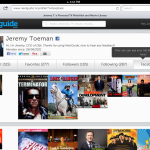 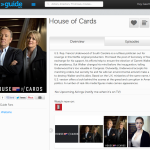 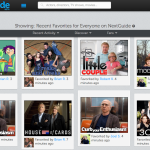 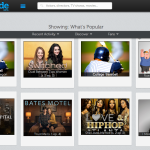 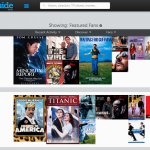 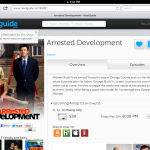 Set a reminder for Arrested Development (or watch previous episodes on Amazon, Hulu Plus, iTunes or Netflix)

No Google TV announcement during the Google IO Keynote

Google just finished the keynote that started their yearly Google I/O event and (as expected) there were no big announcements...