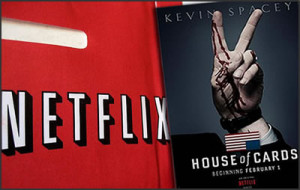 This Friday Netflix has released all 13 episodes of it’s original series ‘House of Cards’ staring Kevin Spacey, Robin Wright and Kate Mara. Directed by acclaimed director David Fincher (The Social Network), the series is the second original from Netflix after Lilyhammer. House of Cards is described as a ‘wicked political drama that penetrates the shadowy world of greed, sex, and corruption in modern D.C. Ruthless and cunning, Congressman Francis Underwood (Oscar® winner Kevin Spacey) and his wife Claire (Robin Wright) stop at nothing to conquer everything’.

Netflix tries to bind it’s existing subscribers and attract new ones by creating high quality content and making it exclusive avalailable on Netflix. A strategy similar to HBO except Netflix controls the complete experience on its own platform. Since it’s not dealing with networks, advertisers and syndication right agreement they are able to make all epiosdes available at once.

An experience beyond streaming

Together with a new season of Arrested Development, House of Cards has to put Netflix in a stronger position, differentiating them from the growing number of (big) competitors providing similar video streaming services. By striking exclusive content deals and producing exclusive content Netflix’s aims to provide a experience beyond streaming and creating a household name as the source for entertainment anytime and anywhere.

“The advantage of Netflix is their ability to shape the market..”

However, with fierce competition from Amazon, Hulu and upcoming competition from Google, Apple and Microsoft the company has to keep their regained momemtum. The Flixter debacle has shown their success is not given and finding the right strategy is key to keep customers happy. The advantage of Netflix is their ability to shape the market by innovating with distribution, content deals, and syndication strategies since the others are still running behind.

Watch te trailer of House of Cards below:

YouTube's interface gets a big update with less distraction, less buttons and a cleaner interface. Read more about YouTube's Redesign!