A day after introducing a new pricing structure for its service, Aereo announced it will launch in Atlanta in June. Aereo streams free-to-air channels over the internet offering DVR capabilities to watch OTA TV on demand. After launching in New York the service got attention from the press and online community but also broadcasters which questioned its legal position. CBS, Comcast, News Corporation, and Disney started legal action against Aereo claiming it is re-broadcasting their free-to-air signals for money and thus breaking copyrights. Last month the court upheld the lower court decision in favor of Aereo allowing the company to expand its service. Aereo’s CEO Chet Kanojia defends the service:

“We’re not a cable company. We’re an antenna technology,” he says. “Ever since broadcasting started, no antenna manufacturer, no television manufacturer has been required any kind of transmission fee.”

Although new law suits have been filed claiming Aereo is retransmitting copyright material the company is now rapidly expanding to multiple cities.

The company announced a new pricing structure offering two plans: for 8 dollar an user can access all available channels and record 20 hours per week, for 12 dollar users can store an extra 40 hour totalling 60 hour of cloud DVR recordings.

Aereo expanding across the US

The strength of the service is its relatively cheap offering of popular channels (considering you need an internet connection), clear UI and easy access of both live and recorded content. Aereo is using the attention of the court ruling and its praise for its simple service to expand rapidly, allowing users to sign up and pre-register for 22 more cities that are coming soon. After signing up users get notified when the service launches in their area and will receive one month for free. Aereo is planning to launch it service in Minneapolis, Salt Lake City, Denver, Kansas City, Dallas, Austin, Houston, Madison, Chicago, Detroit, Cleveland, Pittsburgh, Boston, Providence, Philadelphia, Baltimore, Washington DC, Raleigh-Durham, Atlanta, Birmingham, Tampa, and Miami. 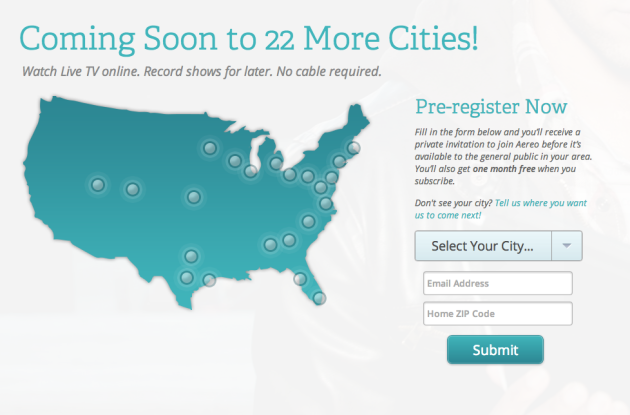 Netflix will release all episodes of Arrested Development on May 26th. Watch the new trailer!